BORN TO BE A SOUTHERN TIMBER TOWN 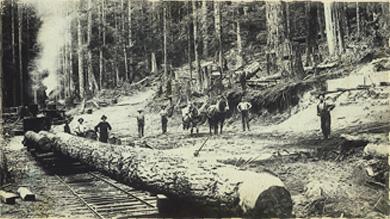 Stone County was officially organized on May 10, 1916, as Mississippi’s 81st county. Located in the southeastern corner of the state, the young county encompasses a land area of 444 square miles, forming a nearly perfect rectangle, except for a 12-square-mile extension on its southwestern corner.

When Mississippi became a state in 1817, the Stone County area was a part of Jackson County. In 1841, it was included in an area that was taken from Jackson County to form Harrison County.

Before the Civil War, the Stone County area was a virtual wilderness covered in virgin pine timber. Two early roads ran through the area, the Old Wire Road running east-west through the southern part of the county, and the Old City Road cutting across the county diagonally from northeast to southwest. There were few inhabitants and no significant settlements. 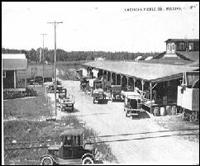 Settlement of the area around Wiggins, Stone County’s seat of government, began in 1886.

The area benefited from its plentiful timber. A bustling timber industry brought population growth and an economic boom to the Stone County area in the early twentieth century. McHenry grew into a thriving sawmill town with more than 1,200 residents. Bond and Perkinston also were becoming mill towns, and one of the largest sawmills in south Mississippi was built in Wiggins in 1902.

As the area grew, so did its resources. Harrison County Agricultural High School was established in 1911 at Perkinston. After Stone County was formed in 1916, the both Harrison and Stone counties continued to operate the school as a joint venture. In 1925, the school became Perkinston Junior College and then the Perkinston Campus of Mississippi Gulf Coast Community College.

The Mississippi Legislature passed an act in January 1916 allowing Stone County to be formed from lands in northern Harrison County, subject to approval of the voters living in the affected area. The election was held May 6, and the new county won approval by a vote of 428-330. 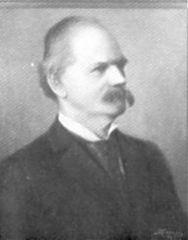 The new county was named in honor of John M. Stone, governor of Mississippi from 1890-1896 and later president of Mississippi A & M College. The county’s first Board of Supervisors met at the Wiggins City Hall. One of the Board’s first acts was to award a contract for a county courthouse. The building was completed in March 1918 at a cost of $29,515.18 and is still in use today.

The 1920 census listed 6,528 Stone County residents. By that time, the county’s timber resources had been severely depleted, and the once-booming sawmill towns such as McHenry and Bond were failing rapidly. By 1930, the timber industry was almost completely gone, and many people were forced to move to other areas to find work. The county’s population in 1930 was 5,704.

Stone County’s population decline proved to be short-lived. By 1940, the county had 6,155 residents, and the population continued to grow during the following four decades. Today the population is estimated at 18,000.

After World War II, the timber industry began to make a comeback, and today the majority of the county’s industries are wood products manufacturers. The Wiggins Board of Aldermen, the Stone County Board of Supervisors, and the Stone County Economic Development Partnership have combined their efforts to attract new businesses and industry to the growing area.

Web design and hosting by U.S.NEXT